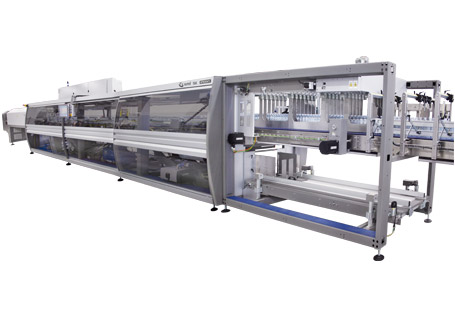 The new ERGON range of automatic packers is based on design choices inspired by key concepts such as ergonomics, technology, sturdiness and modularity, masterfully blended to mark a new, significant evolution in the history of SMI products.

You can point out the new ERGON packers rather quickly due to the rounded profile of the movable safety guards, which allow to house all the motors on the outside with respect to the mechanical units they run, facilitating line operator access when performing maintenance.

The new heat-shrinking tunnels of the ERGON range boast cutting-edge technical solutions that allow reducing energy consumption and ensure the utmost environmental compatibility of the processes as well as the improvement of the final quality of the packaged pack.

The SK ERGON series is composed of automatic shrink wrapper machines for packing plastic, metal , cardboard or glass containers. Depending on the model chosen, they can make packs in film only, cardboard pad + film, tray only, cardboard tray + film.

The SK ERGON series packers can achieve an output up to 450 packs per minute (can packs in triple lane), depending on the machine model and on the product to be packaged. The pack collations can vary according to the container shape and size. In general, the most frequently requested collations are: 2×2, 3×2, 4×3 and 6×4.

All SK ERGON models are equipped with an electronic grouping device and are available with single or double lane (SK 400 single lane only), according to the customer’s exigencies. 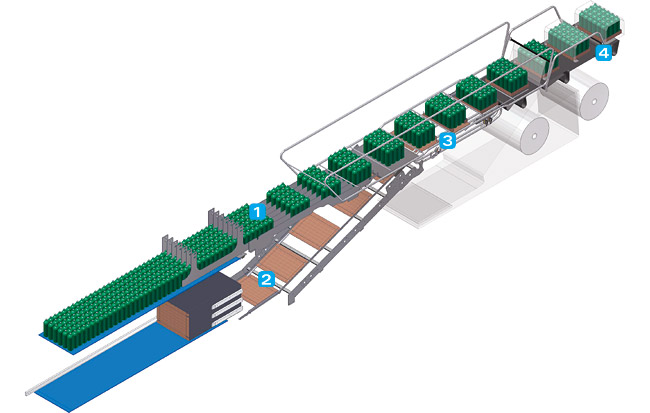 Considerable simplification and higher commonality of machine modules, allowing to: – produce all SKs ERGON with 4 modules only – reduce by 20% the variability of mechanical and electrical components – eliminate all manual interventions in the inner parts of the machine for maintenance and repair

SMI machines can package a wide range of products in several pack collations, so as to effectively meet the end user’s current and future requirements. Moreover, each machine can be equipped with additional devices, which increase its basic functions and ensure a high level of customization of the final package.

SMI machines do not include gearboxes: the motors are directly connected to the drive shafts. The consequent advantage is the reduction of maintenance, energy consumption and noise.

The continuous motion packaging system ensures a fluid production process and protects the containers from strokes, thus granting more reliability, a better quality of the pack and a reduction of mechanical wear.

In the pack formation zone, the use of dividing pins made of thermoplastic material, which last longer than those made of metal, reduces the machine noise and protects the fragile containers (such as glass containers) and their labels.

SMI machines are pre-arranged to control up to three different machine pitches, without replacing the mechanical components. Therefore, it has been possible to increase the product dimensions range of almost 20%, as compared to the previous machines generation. The working parameters of each pitch are stored in the POSYC® control pc; the operator can select the required machine pitch directly from the touch screen.

The rounded protection doors of ERGON models allow broader space inside the machine and thus the motors can be mounted externally on the machine side edges. Therefore, they are easily accessible and reachable for maintenance. Actually, the operator doesn’t need to enter the internal parts of the shrinkwrapper when carrying out manual interventions.

Film reel with built-in motor, in order to enhance the film unwinding precision thanks to a dedicated brushless motor for each reel. Moreover, a new film-tensioning system, controlled by a piston, ensures a constant tensioning and allows to quickly and easily switch from single lane to dual/triple lane operations.

The POSYC® control panel, sliding on a boom running the whole length the machine (fixed on LSK ERGON models), enables even less expert operators to easily and effectively run the packaging machine, thanks to an intuitive interface, a touch screen display and diagnosis functions and real-time technical support available on the POSYC®.

More in detail, the new system patented by SMI is made up of a series of conveyor belts, fitted with motorized rollers, which feed the packer’s cardboard blanks magazine; the cardboard blank stacks are carried on these belts up to the area in which they are translated and then continue up to the collection system at case/shrink packer infeed.

Thanks to specific sensors, the layout and feed of the cardboard blanks on the conveyor belts fitted with the motorized roller and their loading into the packer’s magazine is, in fact, fully automated.

Therefore, the innovative solution devised by SMI eliminates the disadvantages related to the traditional loading of the cardboard blanks magazine, which force the operator to bend his/her body continuously to place the blanks in the bottom part of the machine.

The technology used in the “Easy-Load” magazine also features the great advantage of ensuring fluid and constant picking operations with a wide range of cardboard blanks having a thickness between 0.5 mm and 5 mm.

The NEW TS (Tray Stacker) stacks on two or more layers clusters of plastic, metal , cardboard or glass containers both clustered in cardboard trays or pad and loose (this latter solution solely for fit-in type cans). This device can be installed on SK shrinkwrappers, on WP casepackers and on CM combined packers.

It consists of an electronic stacking device operating in continuous motion, which achieves an output rate up to 60 packs per minute according to the machine model and to the product handled.

Pack collations can vary according to the container shape, capacity and size; in general, the most requested collations are: 4×3 and 6×4. It is available both for single and for double lane production.

After coming out of the trayformer, two or more packs are stacked by means of a Cartesian coordinate system.

Before the pack enters the shrinking tunnel, the film is wrapped around the products and overlapped at the base of the pack.

The Easy-Open system can be installed both on the SK shrinkwrappers and on the CM combined packers. It consists of a device piercing the film during the cutting operation, in order to create the required mark.

It can pierce two types of marks, “X”-shaped and “H”-shaped, and is available both for single and double lane production. Thanks to the Easy Open system, the customer’s level of satisfaction is definitely improved, because of the easier opening of the pack.

Moreover, this application does not require any specific packaging materials and, therefore, allows to obtain eye-catching packs without additional costs.

SMI customers can now upgrade their SK and CM packers with an innovative film welding device. The “film welding device by heated blade” joins the edge of the film reel about to end with the beginning of the new reel while the machine is running, with no need to stop production. The machine slows down and the film (printed or neutral with reference mark) is automatically joined; the machine is immediately back to running at full pace.

The new system allows dramatic cuts on energy and maintenance costs compared to traditional hot sealing method, as there are no more sealing rollers to be kept at a consistent temperature. The sealing precision of printed film or neutral film with reference mark is higher, with +/-10mm margin from the reference mark. The “film welding device by heated blade” can handle also no-collant film.