The CM series includes automatic machines gathering into a single unit the functions of a wrap-around casepacker and of a shrinkwrapper, for the packaging of plastic, metal, cardboard or glass containers in the following package types: cardboard case; cardboard pad + film (only for stable products); cardboard tray + film; cardboard tray without film; film only.

Trays can be octagonal or rectangular, with walls having either the same height or different heights.

CM series machines can achieve an output up to 80 packs per minute, according to the machine model, the product kind and the selected format. The pack collations can vary according to the containers shape and dimensions; in general, the most requested collations are: 2×3, 3×4 and 4×6 for wrap-around cases and 4×3 and 6×4 for tray + film packs. The blanks magazine capacity can be increased through modular expansion units.

All CM packers feature an electronic grouping system and can be supplied with in-line or 90° infeed conveyour, according to the customer’s exigencies. The change-over is automatic. 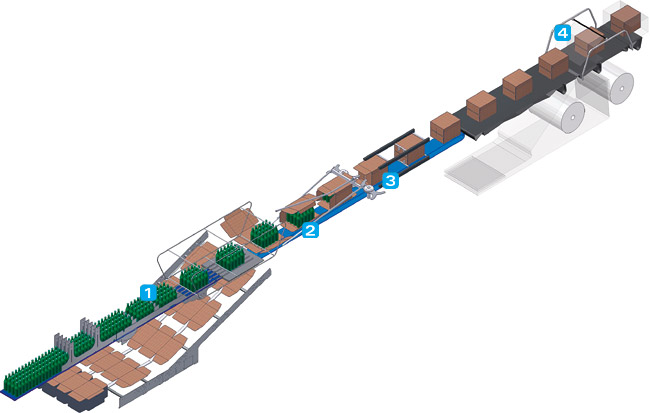 SMI machines are designed according to advanced principles of module assembly and feature interchangeable mechanical and electronic components, which ensure a reduction of the down-times during technical interventions or programmed maintenance and the optimization of the use of spare parts on stock.

SMI machines can package a wide range of products in several pack collations, so as to effectively meet the end user’s current and future requirements. Moreover, each machine can be equipped with additional devices, which increase its basic functions and ensure a high level of customization of the final package.

SMI machines do not include gearboxes: the motors are directly connected to the drive shafts. The consequent advantage is the reduction of maintenance, energy consumption and noise.

The continuous motion packaging system ensures a fluid production process and protects the containers from strokes, thus granting more reliability, a better quality of the pack and a reduction of mechanical wear.

In the pack formation zone, the use of dividing pins made of thermoplastic material, which last longer than those made of metal, reduces the machine noise and protects the fragile containers (such as glass containers) and their labels.

SMI machines are pre-arranged to control up to three different machine pitches, without replacing the mechanical components. Therefore, it has been possible to increase the product dimensions range of almost 20%, as compared to the previous machines generation. The working parameters of each pitch are stored in the POSYC® control pc; the operator can select the required machine pitch directly from the touch screen.

The interchangeability of the mechanical and electronic components and the diagnosis functions on the control panel make the technical interventions and the programmed maintenance quicker and easier; moreover, they optimize the resources, in order to preserve the machines efficiency for long.

Besides the cases with traditional sealing, the CM and WP models can realize cases with superposed or joining flaps. As a consequence, the cases can be easily customized with printed images on the 5 visible sides, with obvious advantages for marketing and promotion, as well as better protection of the case content.

The POSYC® control panel, sliding on a boom running the whole length the machine (fixed on LSK ERGON models), enables even less expert operators to easily and effectively run the packaging machine, thanks to an intuitive interface, a touch screen display and diagnosis functions and real-time technical support available on the POSYC®.

The NEW TS (Tray Stacker) stacks on two or more layers clusters of plastic, metal , cardboard or glass containers both clustered in cardboard trays or pad and loose (this latter solution solely for fit-in type cans). This device can be installed on SK shrinkwrappers, on WP casepackers and on CM combined packers.

It consists of an electronic stacking device operating in continuous motion, which achieves an output rate up to 60 packs per minute according to the machine model and to the product handled.

Pack collations can vary according to the container shape, capacity and size; in general, the most requested collations are: 4×3 and 6×4. It is available both for single and for double lane production.

After coming out of the trayformer, two or more packs are stacked by means of a Cartesian coordinate system.

Before the pack enters the shrinking tunnel, the film is wrapped around the products and overlapped at the base of the pack.

The PID SBP® inserts stretched board pre-assembled partitions into cardboard boxes, in order to protect fragile products (such as glass containers) and save their labels from abrasions.

This device can be installed on the WP wrap-around casepackers and on the CM combined packers.

Compared with the traditional inserting systems of non-preassembled partitions, the PID SBP® allows to:

The PID SBP® and the pre-assembled partitions magazine are mounted at the machine inlet, on top of the pack-forming section. The maximum operating speed is 45 packs/minute.

A mechanical arm equipped with vacuum suckers picks a stretched board pre-assembled partition from the partition magazine, opens it and lowers it between the products that have just been grouped in the required pack collation.

Finally a cardboard blank is wrapped around the products by means of special guides, thus forming a case.

The Easy-Open system can be installed both on the SK shrinkwrappers and on the CM combined packers. It consists of a device piercing the film during the cutting operation, in order to create the required mark.

It can pierce two types of marks, “X”-shaped and “H”-shaped, and is available both for single and double lane production. Thanks to the Easy Open system, the customer’s level of satisfaction is definitely improved, because of the easier opening of the pack.

Moreover, this application does not require any specific packaging materials and, therefore, allows to obtain eye-catching packs without additional costs.

SMI customers can now upgrade their SK and CM packers with an innovative film welding device. The “film welding device by heated blade” joins the edge of the film reel about to end with the beginning of the new reel while the machine is running, with no need to stop production. The machine slows down and the film (printed or neutral with reference mark) is automatically joined; the machine is immediately back to running at full pace.

The new system allows dramatic cuts on energy and maintenance costs compared to traditional hot sealing method, as there are no more sealing rollers to be kept at a consistent temperature. The sealing precision of printed film or neutral film with reference mark is higher, with +/-10mm margin from the reference mark. The “film welding device by heated blade” can handle also no-collant film.